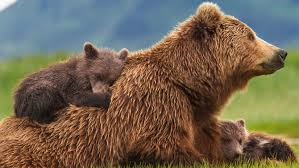 Bears are dangerous omnivores. They eat other animaals such as flesh of animlas fruits and vegetables. Bears can almost eat anything. During the winter season bears give birth to young rather than laying eggs.

There are many types of bears such as the polar bears, grizzlybears and pandas. Australian koalas are not actually bears, they are known as (pouched animals).

Bears are strong heavy creatures with thick limbs, small tails and small ears. They have a thick coat of fur that keeps them warm in the cold seasons. It has crushing back teeth known as molars. Bears have poor eyesight and hearing that can be used for hunting. They have an excellent sense of smell that they can use for hunting.